Life was always waiting for the right moment to act.” ~ Paul Coelho

No one ever expected Harper Lee to publish another book. The writer’s destiny seemed to be an author of a sole publication that has sold over 5 million copies. She surprised the literary world when it was announced that a second novel was in the pipeline for publication. Fifty years after To Kill a Mockingbird was published Go Set a Watchman was released. If you haven’t read either publications, as far as I am concerned you are missing out on very important American literature. I believe “Watchman” will also become known as an American classic in coming years. 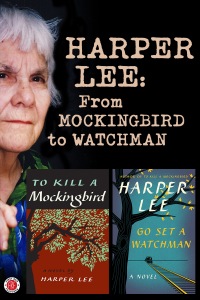 Last week I attended the second in a series of community events at the Bud Werner Memorial Library geared around Lee’s publication Go Set a Watchman. The screening of the  documentary film Harper Lee: From Mockingbird to Watchman (previously titled Harper Lee:Hey Boo) was at the center of the evening. In the film, interviews of famous people in the literary and media world talk about what the classic To Kill a Mockingbird has meant to Americans who love this book.

After the screening, the filmmaker Mary McDonagh Murphy Skyped in to take questions from the audience at the library. I had the opportunity to ask my question. “As a filmmaker what did you learn from Harper Lee about storytelling through the production of this documentary?” Her answer included remarks that to tell the story well, it was a juggling challenge.  She had to go back and revise and edit the film to include information about the 2015 release of “Watchman” by Harper Collins. She also mentioned that more revisions to her 2015 documentary will be necessary as the full impact of “Watchman” on the literary world is made known in coming years. For more information on Murphy’s film which has also been aired on PBS, visit the filmmaker’s website.

Thursday evening, October 15, 2015 is the third event for One Book Steamboat. Charles Shields, Harper Lee’s biographer will be at the Bud Werner Memorial Library in person. He was one of the first persons to be aware of Lee’s manuscript for “Watchman” that had been locked up in a safe deposit box for decades. I look forward to his presentation.

I have never been so immersed in the full study of an author before and it has been an extremely fulfilling experience. Thanks to Jennie Lay at Bud Werner Memorial Library for programming all the surrounding events of One Book Steamboat for this community.

This blog is brought to you by EVVY award-winning author Sue Batton Leonard.