“It is well for the heart to be naive, and the mind not to be.” ~ Anatole France 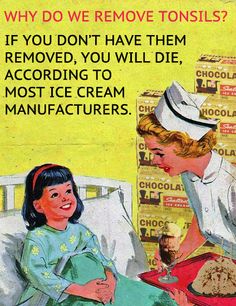 I remember feeling slighted. It seemed like all the kids in the neighborhood had their tonsils and adenoids removed except me.  As a child, it didn’t matter to me that I had lived through pioneering heart surgery, I still wished I could get my tonsils out like many of my buddies.

Apparently, according to this article, twice as many tonsillectomies were performed in the 1950s and 1960s as today. http://seattletimes.com/html/health/2015264059_med10.html.

To a kid, getting tonsils and adenoids removed  meant eating ice cream! And lots of it! Ice cream was one of the few foods that I really adored when I was growing up. And to go to the soda fountain counter at S.S. Kresges or Reads Drugstore for a scoop in an ice cold silver dish with a doily between the dish and…