It came to me on Sunday morning, like an apparition. There I stood at the shoreline, next to the edge of the rip-rap, on a remote island on the eastern shore of the Chesapeake Bay trying to decide whether or not the wind was going to stop me from taking a bike ride.  “Perhaps,” I thought, “a walk would be easier than trying to pedal against what feels like gale force winds.”

Suddenly, out of nowhere something ghost-like swept by me, swirling and twirling overhead in the breeze. “I’m going to run after that,” I thought, “so it doesn’t litter the island.” I took off running in pursuit of what looked like trash.

Each time it dipped, I nearly caught the waste, then the wind picked it up and blew it in another direction. Tired from chasing, I had almost given up hope of ever catching the trash. I was being teased and taunted because the wind kept shifting, blowing the plastic even further from my reach. “I’ll never catch it if I give up now.” Just as I finished my thought, the wind shifted yet again and blew the garbage right over my head, within reach.  I grabbed it! 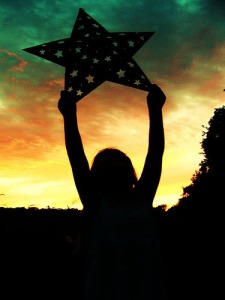 You’ll never guess what it was. A balloon, shaped like a star! It had obviously traveled far, it had little helium left in it, and the gold mylar had taken a beating. It was less than shiny and new. Nevertheless, the shape was still in tact. I ran to show my mother what I had caught. We had a discussion about where the balloon could have possibly come from. “Who knows,” my mother said, as she looked out over the vast sea of water on the Chesapeake, “the balloon could have blown in from anywhere.”

We discussed the weather, and despite the stormy skies,  I decided to try biking. “It will be a good break from my  walking routine,” I said to my mother. I took off pedaling. Once I rounded a corner down the road, it was smooth-sailing. The wind was not even a factor. I’m glad I didn’t let the wind become an obstacle, it was a perfect morning for biking.

During my five mile bike ride, I pondered.”How many times are we stopped from doing something because of barriers. Sometimes we place them in our own mind. Is it not true we almost always find in our actions, fulfillment?”

Just a few independent words, thoughts and views for you this morning.Return tomorrow to www.allthingsfulfilling.com. This blog is brought to you by  www.CornerstoneFulfillmentService.com. A company specializing in e-commerce and e-marketing for independent publishers.