“Art and life are not separate domains.” ~ Piet Mondrian

“What a good way to end a work week,” I thought, as I sat among a group of about 14 other knitters at Sew Steamboat. The group meets each week after work hours on Fridays. I had made a promise to myself that I was going to sit and stitch with this group once summer was over. Last Friday I joined in. Since I’ve taken a knitting hiatus over the past 27 years, I was looking for support and fellowship among fellow fiber enthusiasts in the community where I live. Others have the same objective when they join in on similar crafting groups.

It was refreshing to see a male  in the group. He is a visitor to the community from California. By the yarns he told this gentleman is a very accomplished craftsman who sheers sheep, spins the wool and then turns it into creative projects. “Kudos to this ambitious fellow,” I thought, as I listened to his stories. His daytime job is a family physician, so I guess it could be said “he stitches people and yarns together.”

Here are a few pictures that I took at Sew Steamboat. The room was so light-filled, the photos did not turn out very well, but you’ll get the picture! 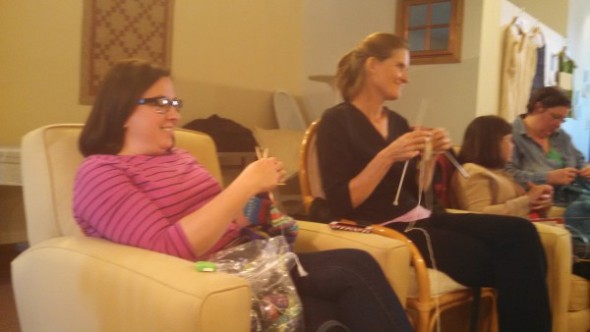 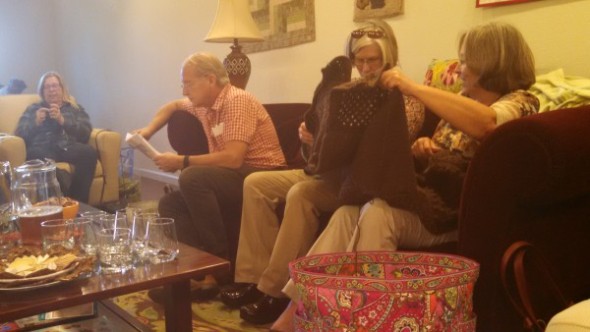 Since today is Film Friday, I’d like to share information about a book to film adaptation which may be of interest to  other knitting enthusiasts.  Friday Night Knitting Club written Kate Jacobs is in stages of development. Keep your eye on this site for more information.

That’s all from All Things Fulfilling today. Have a good weekend. Enjoy the fall season. We’ve already had some snow on the upper peaks here in northwestern Colorado. Morning temps are already sometimes below freezing! Good time to knit myself a woolen scarf and socks!

This blog is brought to you by Sue Batton Leonard, author of the EVVY award-winning memoir Gift of a Lifetime: Finding Fulfilling Things in the Unexpected. The publication is available in audio book (the real treasure is in the voice), paperback and e-book.

Life is like art. You have to work hard to keep it simple and still have meaning.~ Charles de Lin

I’ve always been a person who has lived relatively simply. Four years ago when I moved to this community of Steamboat Springs Colorado, I came to the area nearly devoid of all of my possessions. My accummulations  of  a thirty year marriage have been locked up and stored, and I came with little more than clothes in a suitcase and some business items.

My grandmother’s antique dining room set, my mother and father-in-law’s beautiful desk, my mother’s china, even our wedding album of photographs were left behind. Not wanting to accummulate more, I have been very careful not to amass “stuff” while I have been here. Learning to live without attachments to material things helps a person to stop and consider what is really fundamental to their existance. I’ve learned what really matters,and less is really more. http://bit.ly/reHMkv.

Today, I want to take a survey. If given four choices, what would rank first in terms of your personal fulfillment. What would you most appreciate having if you had little? Pick  just one thing. Let’s see, in the end, where people place their values. Join in by responding.

See you tomorrow on All Things Fulfilling. This blog brought to you Sue Batton Leonard, author of Gift of a Lifetime:Finding Fulfilling Things in the Unexpected