This summer I began switching up my exercise routine alternating from walking everyday to sometimes biking. I haven’t had a bicycle in many years but thanks to my mother, I inherited hers, when she got a new one. At eighty plus years of age, she is still biking three or four days a week. That’s the way to keep on movin’! Most women in the generation before hers took to their rocking chairs at age 60, and now women are staying active well into their 70s, 80s and even at 90.

Its been a while since I have been on a bicycle, and I had forgotten the exhilaration that comes with using that mode of transportation. It is a very fulfilling feeling to be able to cover more ground, than on foot, in a short amount of time.

There are benefits to getting out of a rut, and doing something different. Choosing a unique vacation spot, driving roads less traveled, dressing in something new and stylistically different, eating foods that have never been tried before are just a few things we can do to add spice to our lives. 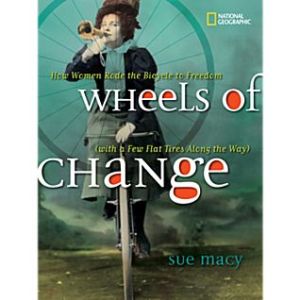 There is a book by Sue Macy, a sports historian, called Wheels of Change: How Women Rode the Bicycle to Freedom (With a Few Flat Tires along the Way) which explores how the bike had social impact on women allowing them to become more independent. Women’s infatuation with biking began as far back as the 1890s, and it started a slow evolution in fashion – moving away from Victorian couture. Bloomers, split skirts, and less voluminous dresses began making their entrance onto the fashion scene, which made biking easier for women and more convenient. Click for more info & ordering

Women’s activist Susan B Anthony once said of biking “I stand and rejoice every time I see a woman ride by on a wheel…the picture of free, untrammeled womanhood.” Anthony’s independent thoughts remind me that I have freedom of choice. The same old story in my life needs to be replaced every once in a while with new narratives.

Gift of A Lifetime: Finding Fulfilling Things in the Unexpected is an story that has been waiting to be told for many years. It is now available! Click for info & ordering

All Things Fulfilling is  brought to you by www.cornerstonefulfillmentservice.com. Where independent thoughts, words and views are all part of the business.

4 thoughts on “Bicycles and Freedom”